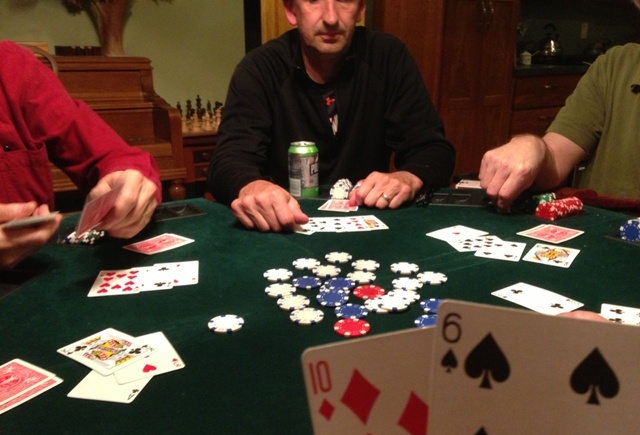 During the past eight years, those words never fail to bring a smile when I read them in an email from one of the members of a poker group I belong to.

I started the group eight years ago because I decided it was something that was lacking in my life. My efforts have since been rewarded with a great group of guys whose friendship has extended way beyond our fun-filled, raucous, once-a month get-togethers, including several annual events that include our wives.

I started off by asking guys to join that fall on the sidelines of sporting events my kids were involved in, at high school band concerts and at other social occasions, including Christmas parties. What amazed me was the number of guys who told me they had nothing like that going on in their lives, but in the same breath insisted they had no need for it or that they “couldn’t possibly commit” to one weekend evening a month.

I persevered. Eventually, I was able to get five guys to commit – and later a sixth was added. The group today includes a doctor, an engineer, a philosophy professor, a commercial real estate broker, a salesman and a pilot.

For the first three get-togethers, I borrowed a felt playing table and casino-style chips from a high school friend of my son, who was using them to play Texas Hold-Em games with his friends. By the fourth month, we broke down and bought our own.

From the beginning, I insisted on a low-stakes, $5 buy-in and have resisted suggestions to raise that ever since. Our bets are 5 cents,10 cents and on rare occasions 25 cents. The thing is, when you’re dealing with colored chips instead of cash, it really doesn’t matter.

Bottom line: It’s not about the money won or lost. My intention was to have a stress-free, enjoyable evening. It worked.

For the first couple of years, we had trouble deciding what weekend night to hold our games. I tried to coordinate things each month by phone and email. It was hard.

Eventually, I took a page out of the playbook of my wife and her female buddies, who organize all sorts of all-female get-togethers. We set a standing date (the second Saturday of each month), wrote it down on the family calendar and stuck to it. If someone can’t make it and we’re short of players, we get a sub. End of story. Not surprisingly, after we did that, the guys started showing more regularly.

Each game runs on a similar schedule. For the first half hour or so, we eat, drink and catch up on each other’s lives. Everyone brings snacks, appetizers and whatever they want to drink (beer, wine, scotch or flavored seltzer water). Some nights the host will make a pot of chili, have hot dogs and hamburgers – or even something like a tasty, home-made bean dip.

And then we play.

What’s been really fun to watch is the permutations of poker-related games we’ve devised that are unique to our club. We rarely play a simple five-card draw game with nothing wild. We make it dealer’s choice and mix it up through the evening with variations of three-,five- and seven-card poker games such as Baseball, Criss-Cross, Fours and Follow the Queen, Low Hold and Adam’s Gut.

Every week seems to result in new twists to the games. Recent ones that we’ve devised include “Fast and Furious” (5-card baseball, with one card down and four up); “Banging Bob” (a variation of Adam’s Gut that one week nearly cleaned out one player…thus the name) and Chicago, Lotkowictz-style (seven card stud, where high or low spade splits the pot with the best poker hand and the player gets to decide and roll each of his four up cards).

In addition to all the crazy games, our topics of conversation throughout the evening never disappoint.  They’re ever-changing and down-right hilarious at times. We talk politics, give updates on our work, family and other local happenings – along with covering the occasional bawdy or outrageous subject.

The most recent game included everyone’s thoughts about the state of the Obama presidency, what’s happening with newspapers these days, wondering what the “real story” was behind a “For Sale” sign in front of a local politico’s house, how to deal with containers of bad gas in your garage  – and whether you can get a shock from urinating on an electric fence.

It doesn’t end with the monthly game. The group has become a cohesive social unit. We started a tradition of an annual couples Valentine’s Day pot-luck dinner with the wives, along with a fall couples get-away at one of the player’s family cottage on Lake George. In addition, we’ve grown closer as friends, helping each other out with home and yard improvements, among other things.

The night’s final is always “Night-Time Baseball,” a seven-card game, where all the cards are initially down and bets are made as each player reveals his cards. It never fails to generate a huge pot and an exciting ending.

Time and time again, win or lose; I’ve heard the guys say, “I can’t believe I’m having so much fun for only $5.” We always joke about the night’s winner getting “lucky” that night with his wife, or being able to make a big payment on the mortgage or paying off their kid’s college tuition bills.

It all starts with the simple declaration…..“I’m in.”