So What Are The Guys Doing? will prompt discussion and insight for men and women alike. 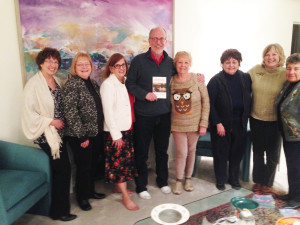 To facilitate your book club discussion, I prepared a list of questions that appear at the end of the book. You can also view them or download them here.

If you live in Central New York, perhaps we can arrange for me to attend one of your meetings for an informal Q & A. If you’re from outside the area, I am open to a Skype discussion during your meeting. You can contact me here.

In So What Are The Guys Doing? award winning journalist and author, David J. Figura shared his transformational journey and captured the narrative of 50 men regarding real life subjects, such as career, friendship, marriage, relationship, religion, sex and midlife challenges. These questions suggest dialogue for personal reflection and discussion between couples, friends and book clubs.

David J. Figura noted the growing trend of such things as all-women 50th birthday getaways and celebrations. He recalled his 50th was a bit of a downer with no friends—just a dinner with his family and a cake. How did you celebrate your 50th birthday? Do you agree with his premise that, in general, women are handling such milestones in their lives better than men? Why?
~ At the start of Chapter 3, David noted “mid-life” warranted change. Do you agree? If so, list three changes that you feel you should made (or have made) in your life.

David mentioned the national statistics showing that more women than ever in our society are working full-time jobs and are single. Do you feel these changes have influenced sex roles? Discuss how things differ from your parents’ generation.

~ In Chapter 3, a lawyer noted his decision to quit a high profile, successful law firm after attending a funeral service, during which the person who gave the eulogy lauded the deceased for choosing the law firm over his family. He particularly bristled at the idea that cancelling planned family vacations and working weekends on legal cases was something that should be commended. Does work ever overwhelm your life? Where do you draw the line?
~ If you could have any job in the world, and salary was not an issue, what would it be? Why?

David wrote that the concept of having friendships is like maintaining a garden. Is your garden healthy and thriving or full of dead plants and overcome by weeds? What are some of the things you do to maintain your friendships?

Happiness ~ Some men interviewed had the attitude, “If everyone else around me is happy, I’m happy.” The police officer, though, felt resentment toward his wife for all the time she spent with her female friends. His wife finally confronted him and said, “It’s not my job to make you happy. That’s your job.” Discuss these two answers. Which do you agree with? Why?

In Chapter 4, Pete, the Human Relations Manager, noted that his vision of retirement involves things like “going on cruises with my wife. Everything I envision involves her.” Is this a healthy and realistic expectation? Why or why not?
~ Mike, the counselor in Chapter 6, noted when it comes to men versus women communicating, women seemed to feel “less threatened with self-disclosure. But for men, we really didn’t grow up with that. That’s not part of our culture. On top of that, we (men) don’t support one another in self-disclosure.” Do you agree with his assessment? Are communication dynamics something that’s cast in stone or something that can be changed?

Cliff, the architect in Chapter 7, noted a certain level of sex is necessary to sustain his relationship with his wife. “Otherwise, you’re just sort of cohabitating,” he said. Do you agree with this statement? Why or why not?
~ Simon, the store owner in Chapter 7, said that women “are kidding themselves” that their husbands can absolutely abstain from sex for lengthy periods of time and not look elsewhere. “And maybe the guys are fooling themselves that the women don’t care,” he added. Discuss these two statements. Are they true?
~ Are you capable of having a no-holds barred conversation with your significant other discussing your current level of happiness and all your personal needs, including sex? How can you begin the discussion?

How do you and your significant other do your finances? Is all the money put into one account to pay the bills, or not? Do you have personal checking or savings accounts that you tap into? What are the strengths and weaknesses of having separate accounts?

It has been said that many men take better care of their cars than their bodies. Is that true? Why?

National statistics point to the trend that more women go to church or claim affiliation with a particular religious faith than men. Why do you think that’s so?

To this day, David has the phrase, “If I don’t do it, it won’t happen” written on a note card and taped to his bathroom mirror. It has inspired him to take positive action during the writing of this book and in his marriage, in making friends and in taking risks in his career. Identify something you consider important in your life that you are not getting done—something you have the power to make happen.