Dealing with the death of friends

My brother-in-law, Tom, reminded  me recently that I’m “getting to be that age.”

“It used to be that all you were going to was weddings,” he said. “Now it’s starting to be funerals, more and more.”

I had just come from a memorial service for Rick Augustine, a good, childhood buddy.  Rick (pictured above) passed away unexpectedly from a heart attack on Halloween, while jogging on a treadmill at an exercise place in Albany. He was 59.

Middle age marks the onset for many of us of dealing with aging and dying parents. Add one more big development – the death of friends.

It seems like it was just yesterday that I was jamming with Rick  and Brian Whitaker, center, at our 40th high school reunion picnic. Rick and I were on guitar; Brian was playing mandolin. 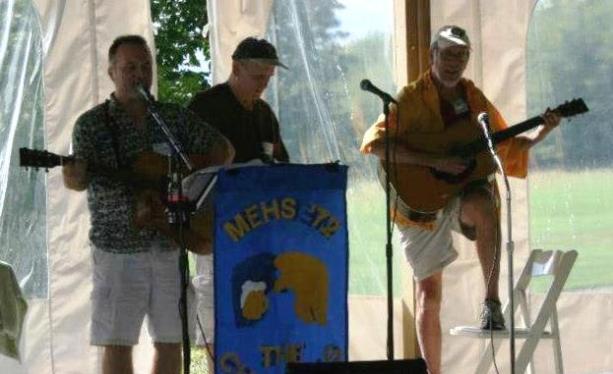 Only a handful at that reunion picnic two summers ago knew that all three of us grew up on Lyncourt Drive in Endwell, N.Y. and that we got our musical start together around 6th grade.

Our parents bought us acoustic guitars at the same time. Maybe it was for Christmas. I don’t remember. The three of us took guitar lessons together for several months — and for years afterward we would share tunes and licks, often playing together during the summer on each other’s front steps.

Rick was a guy who always had a big smile and positive outlook about things. He was a big part of my childhood on Lyncourt Drive.

What a childhood we had. We had more than a half dozen boys in our neighborhood who were the same age. We played sandlot baseball, whiffleball, football, soccer and boogieman tag together.

We formed a gang (“The Vikings”) and hung out on countless afternoons in a tree fort in the woods. We picked burlap bags full of crab apples and tomatoes from a nearby farmer’s orchard and flung them at each other, and at kids from other nearby neighborhoods who dared come near our tree fort.

We were all on the same Little League team. Many of us played soccer together in high school, and some of us ran on the track team.

Then came girlfriends, graduation from high school and college. The ties forged by years of growing up together loosened.

Musically, though, Rick kept at it.  He wrote songs and played solo gigs for years.  At the meal/gathering following his service, a couple of his CDs were passed out. I learned that he had converted the downstairs of his Albany home into a recording studio.

The past couple of weeks, I’ve been listening to his songs while I drive. Rick had a quirky, irreverent sense of humor and that came out in his tunes.  They’re hardly top 40 material, but they’re funny. Songs like “All My Neighbors Suck,” My Wife is Biodegradable,” “Ax Murderer in Camp” and “I Love You So Much (I Think I Pooped My Pants).”

But there were also good songs about unrequited love, loneliness and a female friend beating cancer.

There’s been a great deal of internet chatter about setting up a scholarship fund and taking other measures to honor Rick and others from the Maine-Endwell High School Class of 1972 who  passed before him.

What would Rick think of that? I’m not really sure. I could see him shaking his head and saying, “I don’t know, Figs. Shit happens. I was nothing special.”

Rick’s passing was a shock, a grim reminder of the frailty of life. It jolted me. It also got me thinking about getting in touch, and staying in touch with certain individuals from my past.

Say you don’t have time for that? Think again. We’re all a composite of our life’s experiences – particularly the impact good friends have had on us along the way.

One of the big reasons for writing this blog was my realization after I turned 50 that many middle age guys don’t realize, or are in complete denial about the importance of having male friends and staying socially connected.

Work and family are important, but so are friends. Making time for them increases your level of happiness, your quality of  life.

The good feelings I had at our high school reunion two years ago reinforced that – as it undoubtedly did for many others who attended.

As for Rick, a few of us got together at the Galley bar that night following his memorial service. We hoisted a few beers in his honor and had some good, hard laughs telling stories about him.

I’m sure that’s what Augie would have wanted.  Rest in peace, buddy.

(P.S. The two photographs used in this column were supplied by Dave Sedlak, a high school classmate who was at the reunion. Thanks, Dave.)