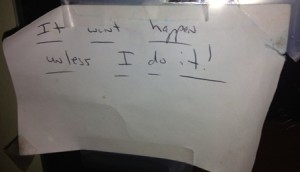 “You know, it’s scary,” he said during a recent phone conversation. “It’s scary because I don’t know if I’m going to have another chance like this. It just seems like the right thing to do, though.”

Jim was talking about his recent decision to switch jobs at age 55. It wasn’t an easy decision. He had been working more than 30 years at a local college in the informational technology department, thinking he was going to stay there until retirement.

Then came the request by his boss to train a new hire, a younger guy, to do a lot of the same work that Jim was doing. To add insult to injury, Jim found out the new hire was earning more than him.

Suddenly, a two-year-old, standing offer from a fast-growing Canadian firm with good credentials that wanted Jim on its team now seemed attractive. Jim told me the job paid more, had great benefits and would allow him to work mostly from home.

Jim weighed the pros and cons and took the new job.

I identified with Jim because I also took a big risk in changing my career more than seven years ago. At the time, I must admit, I was worried.

I had been on the city desk of newspapers for more than 23 years working my first six as a reporter, and the final 17 in various editing positions. I was in my early 50s and getting burned out. I was working as a regional editor at one of the newspaper’s outside offices, overseeing five reporters.

It was fun at times, but work in the bureau often felt like that Bill Murray movie,”Groundhog’s Day,” as a I constantly seemed to be dealing with the same local issues and personnel problems. Making matters worse was a growing trend at the paper to cut staff at the bureaus. I just knew sooner or later my bureau would be pared down – possibly even eliminated. Or worse yet, that I might be laid off.

Then, the newspaper’s outdoors writer (hunting/fishing) decided to retire early because of health problems. I initially thought about applying, but I paused. My wife, Laura, advised against it.

At first I didn’t apply. A total of 14 other employees at the paper went for the job. The position remained unfilled. I was told privately that upper management was waiting to hear from me.

About that time, I was interviewing men for my book about middle age guys and one of  interview subjects, a long-time counselor with the veteran’s administration, told me about his greatest fear in life.

“My greatest fear is that I’ll be afraid to take a risk at my age,” he said, explaining how at age 54 he too was burned out on his job and couldn’t see himself retiring until at least 65.

“I fear that the right kind of job or opportunity for me will come along, and I won’t have the guts to take it,” he said.

That interview inspired me. I knew deep down I could make the outdoors thing work for me.

I took the job,expanded the coverage to everything from birding to bear hunting.  That was nearly seven years ago. I currently love what I do.  I feel blessed because I look forward to going to work each day.

My observation is that guys for a wide variety of reasons  during middle age paint themselves into a corner work-wise and feel powerless to change things. There comes a time, though,  when you have to ask yourself: “Is this is good as it gets?”

There’s a note card that I taped seven years ago to our bathroom mirror that inspires me. It reads, “It won’t happen unless I do it.”

The bottom line is that you are the gatekeeper to your happiness. On the other hand, not to decide is to decide. It’s as simple as that.

By the way, the counselor who inspired me to take the outdoors job at the newspaper did leave his job and started up his own private counseling service. He specializes in, among other things, offering “life coaching” advice for men.. The way his secretary answers phone calls makes me smile.

After giving the caller the name of the company, she always adds the phrase, “What have you got to lose?”